Creativity and humanity during the pandemic – EXIT festival 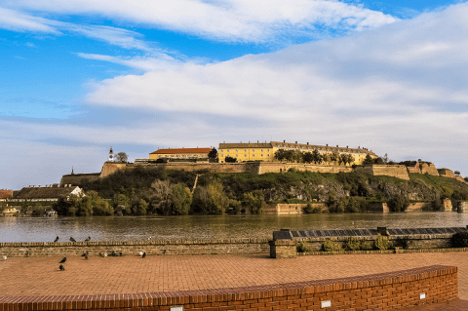 The global pandemic has disrupted every kind of socio-economic activity. Tourism and hospitality were the first that felt the consequences caused by the global pandemic. Immediately after them, the creative industries felt the same. Although strongly affected by the situation that has befallen the whole world, the creative industries find a way to share their energy and positivity with the rest of the world in unusual circumstances. Good example of this comes from our city, Novi Sad, and it is the Exit festival.

Every year, the Exit Festival gathers the most famous performers of the world music scene in a well-known place – Petrovaradin Fortress. Last year’s Exit had a record attendance, where over 200.000 visitors passed through the Petrovaradin Fortress in 4 evenings. This year, the Exit Festival was supposed to celebrate its 20th anniversary and it was planned to surpass last year’s figure and give visitors an unforgettable experience. However, as the COVID-19 pandemic stopped the whole world, all those plans failed.

Festivals around the world had to be canceled, and the same thing happened with Exit. But Exit festival has something else on mind. What it can be in these conditions?

It is a project that provides support to all people who found themselves on the brink of  hunger due to the COVID-19 pandemic. The pandemic caused a lot of problems and made life even more difficult, especially for people who are fighting against climate change, frequent droughts and floods. This project was realized in September and gathered an impressive list of global and regional artists, and exclusive performances attracted the attention of the entire planet.

Compared to the Exit festival that was organized in previous years, the realization of this year’s festival differed drastically. The capacity of the audience that could attend the festival was reduced by 95%. Unlike previous years where visitors had the opportunity to enjoy music on 40 different stages, this year only one stage was open to visitors – Dance Arena. One-day ticket sales was organized online.

The allocated space was divided into five sectors:

Each of the sectors was divided into zones separated by physical barriers and fences within which a maximum of 5 people. The program was broadcast live via the EXIT festival’s Facebook page and it was available to audience around the world. Every day of Life Stream was dedicated to one of the basic elements of the planet Earth. During the performance of the program, videos and materials aimed at promoting and protecting the environment and stopping hunger were broadcast. Also, the tourist attractions of Serbia and Novi Sad were promoted.

Although the event has passed, the organizers of the Exit Festival focused all their efforts on the preparation of video material from the event and thus delighted the audience. Performances from Life Stream were broadcast during two extended weekends, from September 17 to 20, as well as from September 24 to 27. The complete Life Stream program was available through the official website, Facebook page and YouTube channel of the EXIT festival, as well as on the Life Stream website.

Creative industries and overcoming the crisis

The example of the Exit Festival showed us that creativity, innovation and new digital solutions are crucial for overcoming the crisis and fighting the influence of Covid-19. The closure of certain cultural sectors in people had caused even greater desire to connect, and it’s essential for all us to provide support to creative industries.

Nurturing talent in the cultural and creative world is extremely important for economic growth. It is necessary to connect and share experiences with partners from neighboring countries in order to work together, to grow and overcome all the problems that each of us is currently facing.As one of the partners on the O-City project, BINS team believes that together with global partners can provide far better conditions for the work and development of creatives, which will also help them overcome the crisis that has befallen all of us at the moment.